When you go to a physician, physical therapist, massage therapist, or other pracitioner operating in the model of modern Western medicine, he or she will talk to you about muscles, nerves, bones, and organs.

When you go to a shiatsu therapist, or an acupuncturist, he or she will talk to you about things like "Liver qi" and "Kidney yin".

What's the relationship between these concepts?

It is unfortunate that when some people encounter the theory of Chinese Medicine behind Asian Bodywork Therapy, they immediately dismiss ABT as incompatible with modern scientific knowledge. This is an error in two ways: it confuses the question of "Does it work?" with "How does it work?", and it misrepresents the nature of Chinese medical theory.

Obviously I'm going to have a biased answer! As a practitioner, I've seen shiatsu and acupressure have wonderful effects on clients, and I have benefited greatly from these modalities myself (and from acupuncture as well).

But I also consider myself something of a skeptic, and I know that anecdotal evidence is not reliable. So I'd like to present some of the research evidence for the benefits of Asian Bodywork Therapy.

To date, most scientific research on Chinese medicine has focused on acupuncture rather than ABT. However, some studies on shiatsu and acupressure can be found by searching the National Library of Medicine (NLM) PubMed service. (NLM is part of the National Institutes of Health.) You can search for articles on shiatsu and acupressure by following this link.

(Since acupressure treatment of specific points tends to be more readily standardized, most of these studies are of acupressure rather than of shiatsu.) 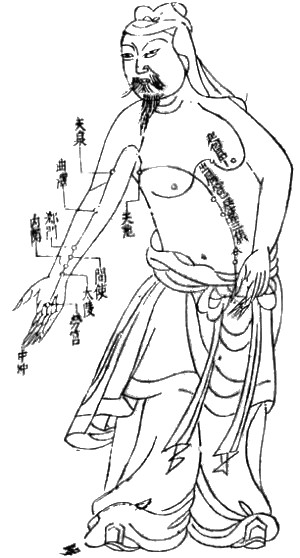 Some of the limitations of studies on Chinese medicine should also be noted. For example, let's look at a study with negative findings. I haven't found any negative findings for acupressure, but let's look at a study on acupuncture for pain relief published in the Annals of Internal Medicine (5 July 2005, Volume 143 Issue 1, Pages 10-19). This study found that acupuncture was no better than "sham acupuncture" at relieving pain. However:

Unfortunately, fundamentally flawed studies like this are all too common.

The NCCAOM has started working more closely with the NCCAM, and I hope to see more and better research forthcoming. Meanwhile, it seems safe to conclude that ABT is a safe treatment that has, at a bare minimum, positive non-specific effects in relieving stress and chronic muscle tension, and that there is significant evidence of more specific benefits.

When evaluating the research into complementary medicine in general, I recommend considering this article by Ted Kaptchuk. (I also recommend his book The Web That Has No Weaver for those who would like to learn more about Chinese medicine.)

How does it work?

From a physiological perspective, there are several theories about the meridians and points of acupressure. One involves nerve reflexes between the skin and the visceral organs; there are others involving the electrical properties of fascia (connective tissue), and another involving embryological connections throughout the body that persist into adulthood. It's possible that different points work by different mechanisms. The explanation is far from complete. Certainly the "placebo effect" plays a role - as it does in any treatment. (Google for "placebo surgery", it's fascinating.)

But Chinese medicine gives us a model of the human being that is not much concerned with these anatomical and physiological explanations. This model is a functional, not a structural, one; the Vital Substances, the Zang-Fu organs, and the meridians are best understood by what they do, not by chopping people up looking for structures.

The anatomical/reductionist model of the human being and the Chinese medical model are complementary, not opposed to each other. The relationship between the models is similar to two very different ways we can talk about music. We might describe a certain sound in terms of a time-varying frequency spectrum, or we might say something like "that's an A chord played on a steel-string guitar". The former description may tell you why, when you play it through your amp, it makes your speaker buzz because of some resonance; the latter tells you how it works in the music.

Both models are correct, but emphasize different aspects of our experience.

So what is this "qi" stuff?

"O genki desu ka?" is the Japanese way of asking "How are you?"; it can be literally translated as "How is your ki (qi)?" (Specifically, "genki" refers to what the Chinese call "yuan" or "original" qi, a specific type related to your basic constitution.) The question doesn't require any objective measurement to answer.

Indeed, can you imagine saying "I have a lot of energy today," only to have a scientist perform a set of measurements and inform you that the total amount of chemical and electrical energy in your body is in fact less than it was yesterday, and so your statement is incorrect?

Obviously, the word "energy" is being used with two different meanings here. When we talk about the energy of qi, we do not necessarily mean the same thing that physicists mean when they speak of energy; the energy of qi is a subjective and experiential phenomenon, not a completely objective one.

(Many other words are used in specialized senses in scientific discussion: the physicist's definition of "work" is such that a weightlifter who returns the bar to its starting point after a set has done no work on the weight, despite what his or her aching muscles say. Similarly, mathematicians who specialize in the field of "information theory" will say that a page full of random letters has more information than a page of meaningful English text.)

Now, take thousands of years of careful observation of this experience of energy and vitality; consider what physical and mental actions, what foods and herbs, what lifestyle choices, and what therapies tend to cultivate it. That's Chinese medicine.

≡ Menu: Does it really work?